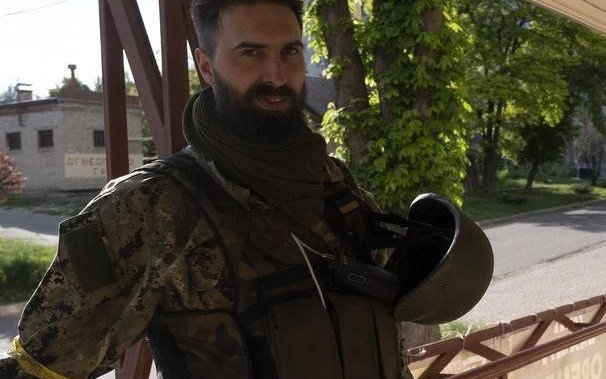 A Russian tank killed a Canadian fighter who was trying to carry a fallen comrade to safety in Ukraine’s Donetsk region, grieving members of his battalion say.

Emile-Antoine Roy-Sirois, 31, from Montreal, died alongside three other foreign fighters on July 18, after his company was ambushed by a Russian tank near the front line in Ukraine’s eastern Donetsk region.

It is believed to be the first Canadian death in active combat during the 2022 Russian invasion.

“Emile brought humanity to the team,” says one of his comrades, who is known as “Fin.”

“He was very kind. The group just won’t be the same without him.”

Propaganda or providence — one Ukrainian’s wild story of survival

Sirois’ body now lies in a morgue in the central Ukrainian city of Dnipro, awaiting instructions from the Canadian Embassy on how it should be repatriated. The Ukrainian Armed Forces, which Sirois was serving, has offered to pay for the cost of the repatriation.

Sirois, a paramedic with experience in the French Foreign Legion, was killed alongside Luke “Skywalker” Lucyszyn and Bryan Young, both Americans, and Edvard Selander Patrignani of Sweden. The men were part of an international battalion within the Territorial Defense of the Armed Forces of Ukraine.

Global News spoke to comrades of Sirois’, who was fondly referred to as “Beaver,” at an unofficial memorial for the four fallen soldiers at a downtown restaurant in Kyiv on Wednesday.

Two of the men had temporarily discharged themselves from hospital to pay their respects — one with an IV catheter still taped to his hand. Both were injured in the July 18 attack that killed Sirois.

It was a lighthearted afternoon of laughter and spirited conversations which belied the horror of a brutal Russian attack that targeted the group as they attempted to save a wounded soldier.

The company of foreign fighters, made up of about 80 men and three women, was formed at the end of June and deployed to eastern Ukraine to slow the Russian advance, under the charge of a Ukrainian commander named Ruslan.

The battalion was initially deployed to Lysychansk, in the Sievierodonetsk region, before the city was captured by Russian forces on July 2. They were then dispatched to the small village of Hryhorivka, four kilometres northeast of the strategic city of Siversk.

In Ukrainian control, Hryhorivka is surrounded at three compass points by Russian-occupied territory, on the cusp of the front lines.

Siversk is on the axis of a current Russian push for territory and is located on a highway critical for moving goods and troops to the front lines.

The day of the attack, the soldiers say they’d received information that Russian troops were crossing the Siverskyi Donets River on foot, from Russian-occupied territory, and were setting up position in a bid to take Hryhorivka. About 30 men, divided into three teams, went out on foot to defend their position, the soldiers say. Sirois went with them.

Kim Patrik Hunsdal, from Norway, recalls walking down a valley road, the village of Hryhorivka on one side and the river on the other, when they were “completely caught off-guard.”

“A tank rolled up on us and overlooked us. The teams in front got behind some cover … but the last team [couldn’t],” he says.

“We just took so much incoming fire — it was mortars, artillery, tanks shooting at us and everything at once.”

A Ukrainian soldier who wanted to be known only by his call sign “Fin,” says the Russian artillery was accompanied by drones, which was helping the accuracy of their fire.

Luke Lucyszyn, the American, was wounded as the teams came under fire, Fin says. Lucyszyn was a medic and as there was no other medic on hand, Fin and Patrignani, the platoon surgeon from Sweden, rushed to provide medical aid.

“We asked Oscar (another soldier) and Emile to come and help us because they were the biggest guys on the team,” Fin says.

“But as soon as the guys picked [Lucyszyn] up, there was a direct hit from a tank.”

2:05
Ukrainian troops dig in to stop Russian advance on the Donbas

Ukrainian troops dig in to stop Russian advance on the Donbas – Jul 8, 2022

Fin says he managed to crawl to safety and sought shelter under a tree.

“There was a lot of dust and we couldn’t see what happened. There was continuous shelling after that,” Fin says.

“They just kept going. They really wanted us dead.”

Hunsdal says that they had expected a higher death toll due to the severity of the shelling.

The shelling was so intense for the next few hours that the four men’s bodies could not be retrieved until a day later. Ruslan, the company’s commander, accompanied Sirois’ body from the front line to Siversk, before it was accompanied by another officer to a hospital in Kramatorsk, and finally to a morgue in Dnipro.

Speaking at the makeshift memorial in Kyiv, Ruslan says he felt personally responsible for escorting the bodies of the fallen soldiers.

“I was responsible for developing this company from the very beginning. We spent quite a time together, training and then fighting together. We are a family,” he says.

Sirois was one of two Canadians under Ruslan’s charge. The group was made up of fighters from several countries, including the United States, New Zealand, Sweden, Norway, Georgia and Belarus. About five or six men had decided to terminate their contracts with the company after the attack, Ruslan says.

He had been in contact with the Canadian Embassy in Kyiv, which Prime Minister Justin Trudeau reopened in May but is still not offering in-country consular services, about the repatriation of Sirois’s body. He is still waiting to hear, via the embassy, whether the family wants the body to be cremated or repatriated so he can send Sirois home. In the meantime, it waits in a morgue in Dnipro.

“There is lots of bureaucracy involved,” Ruslan says.

Global Affairs declined to answer questions about Sirois’ death. In a statement, it said it was “aware of the death of a Canadian in Ukraine” and that consular officials were in contact with the family.

‘They are heroes and I love them’

On a scorching Wednesday afternoon in downtown Kyiv, the soldiers sat around a large table in a traditional Crimean Tatar restaurant, joking and sharing memories of their fallen comrades, as waiters in traditional Crimean dress delivered heaping plates of meat and dumplings. The men were joined by Lucyszyn’s wife and sister, as a funeral for the American had been held earlier that day.

Fin, who is now on crutches due to his injuries and is recovering at a Kyiv hospital, had been granted a temporary discharge to say farewell to his friends. Dressed in military uniform, he says he would return to his hospital bed later that night.

Sirois had joined the company at the beginning of June, Fin says, alongside Lucyszyn. He remembers him as “kind, polite and always saying sorry.”

“It was always a joke — we asked him, ‘When you shoot the Russians, are you going to apologize before it?’”

As a Ukrainian, Fin says serving alongside foreigners fighting for his country is a “strange feeling,” but the “gratitude and respect we feel for them is huge.”

“Most of these guys have nothing here to fight for other than their feelings or morals or understanding of right and wrong,” he says.

“But all the foreigners I’ve spoken to, they’re all great people. You wouldn’t see this in every army — foreign people with so much devotion, who come not for themselves but for other people.”

Oscar, who was also injured with Fin in the attack, is at the makeshift memorial with an IV still taped to his hand. He says he asked for a discharge from hospital to spend the day with his comrades, but his doctor took too long to reply so he left anyway.

Visibly emotional as he speaks from under a bucket hat about his fallen “brothers,” Oscar says he is struggling with survivor’s guilt. He shakes as he speaks and is largely unable to make eye contact.

“There’s shrapnel in my legs and my back but here I hurt more,” he says, pointing to his head.

Once a symbol of wartime despair, Kyiv’s train station is a place of hope

Oscar says the men who died were his “best friends” and the “Russians killed them like dogs.” He was determined to return to active combat after he had recovered to avenge their deaths.

“They are heroes and I love them,” he says.

Hunsdal says Sirois had been focused on learning about weapons training and was a “really, really good guy.”

“He wanted the best for this country. He knew the risks we were going into but it didn’t stop him.”

He stressed that the Donetsk region was every bit as bad as it had been described, and that he had witnessed horrific deaths, including several near-death experiences himself.

He said a company near theirs had experienced 50 per cent losses over a couple of weeks.

“There are so many people dying.”

‘I’m sorry I could not save her son’

Sirois’ commander, Ruslan, says serving alongside foreign volunteers had made him a better leader and soldier.

“Foreign volunteers, who come from different countries to support Ukraine, they represent the best of the best part of your society.”

“The priority is to bring boys back safe and sound. But we have to keep in mind that we fight the war and you can’t leave positions. You know you have to fight.”

He says Sirois, in particular, was an “irreplaceable loss.”

“He was a good soldier and a good friend,” Ruslan says.

“He was well-behaved and with good manners. And this might seem slightly different from some of our guys. He’s big, handsome with soft power and we really miss him.”

We then passed on a final message from Sirois’s mother, Marie-France Sirois, whom we’d spoken to earlier in the week and who had asked us to tell Ruslan simply to “take care of him.”

Ruslan nodded solemnly. After being asked if he’d like us to pass on a reply, he took a deep breath and stared intently at the floor for several seconds.

“First of all, I’m sorry that I could not save her son. [I want to] thank her and the family, they brought up a very good son,” he says.

Sirois’ mother had earlier paid tribute to her son in an interview with Global News, saying “Émile loved everything that elevated the soul and hoped, by that very fact, for a better world.”

“He was a being of gentleness, kindness, generosity, humour, erudition and humanism, but above all, he was an exceptional being. With the war in Ukraine, he felt a call: a call that he could not ignore.”

She said Sirois had “noble convictions and values” and his friends often joked that he was from another time. He leaves behind one sibling, a sister.

“My son was particularly fond of the motto of the French Republic: Liberté, Égalité, Fraternité. He dreamed of it. And I’m sure that no matter where he is now, he dreams of it still.”